Home » Uncategorized » Income gap is on the rise, but don’t blame the 1%

Income gap?  But things are getting better.  Right?

I’m so tired of the media treating the general public like fools and not addressing the real issues. CNN reported today that income is on the rise and showed this nifty graph to make everyone feel good inside. Daddy’s bringing home an extra 95 cents an hour! Put down that Oscar Meyer, we are eating deli counter bologna sandwiches tonight! To their credit they do go on to say that we are making much less then we were before the Great Recession started in 2009.


Yet the headline celebrates that we are making 3.8% more than we were in 2011. Do you know what they don’t mention though? The income gap, and how we aren’t doing as well as we should.

Income Gap?  Well how is production?

GDP has been doing pretty well in those 3 years from 2011 until now . If you use CPI to adjust for inflation and set everything to 2014 dollars, GDP has risen 6% in the same period that median income has only risen 3.8 percent. The stock Market has gone up an astounding 45% since 2011. So what gives? Why is average Joe and Jane getting 3.8 percent when the US economy is growing by 6% and the stock marking has been booming?

Well Derek Thompson over at the Atlantic gives us a pretty good clue. Everyone is getting on the top 1% for hogging all the money and widening the income cap, but that doesn’t really capture the real picture. Derek has this handy visual. 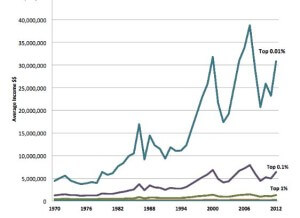 The Income gap within the top 1%

Well look at the income gap between the top .01% and the top 1%. The income of the .01% has been skyrocketing. The top 1% are hardly scraping millionaire status. Sure they are doing fine, but I think we are pointing the finger at the wrong people. If you take the top .01 percent out of the top 1%, the income gap isn’t all that bad. In 2011 to be in top 1% your adjusted gross income needed to be at least $388,905.

While that will set you up pretty well, you are only taking home about 10 times the average American. While I couldn’t find an adjusted gross income for the top .01%, their income was over 30 million. If their AGI is even half of that, they are still 50 times better off than the family just scraping by in the lower level of the top 1% income grouping. Basically the people just making it into the 1% have much more in common with the average American than the top .01%. The top .01% are the ones driving this income gap. They are the ones cashing in on that 45% increase in the stock market that the 99.99% of us worked so hard for.

Look, it’s no secret why the income gap is out of control. Take a chart and graph the stock market, then take another one and graph the income of top .01% and tell me what you see. If we want to fix this we need better market controls, and higher tax rates on the super-rich. They are making the most of this machine, they should be paying most of the maintenance. And yes I know that the top 10% already pay 68% of the income tax.

The thing we need to realize though is the median family income of the bottom 90 is less than 50K a year. With rent and healthcare eating up an average 26K a year, you’re already down to 24K. Studies show a modest family food plan runs about 200 a week, so now we are down to 14K. The Department of Transportation estimates the average American pays about $10,000 a year for transportation costs. That leaves us with $4000 to cover education, and saving for retirement.

At some point you’re taxing their ability to live in the country. If you think the bottom 90% should pay more in taxes, then pay them more money. It’s simple physics to show that it’s in the top .01%’s best interests to want to fix this. Every time a system gets too top heavy it’s just a matter of time before it falls over.

Our Most Popular Articles