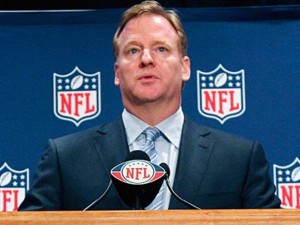 Unless you live outside the United States then you have most likely heard the NFL controversy surrounding Baltimore Ravens running back Ray Rice. The NFL has made a series of mistakes handling the issue, and the latest mistake is yet to unfold. Before we get to the latest mistake let’s recap the details of the controversy.

Many people were outraged when the league handed down the lenient 2 game suspension after the first video was released. Knowledge existed of the second tape from the onset of the incident, but keep in mind that no one outside those directly involved in Rice’s criminal investigation publicly admitted to seeing the tape.

Defenders of Ray Rice in the media assumed that the NFL saw the second tape, and it must not have made Rice look like the aggressor or the NFL would have handed down a harsher penalty. The logic made sense, as why would the NFL want to deal with the fallout for being lenient on someone who was caught on tape beating their then girlfriend.

The NFL has made mistakes from day 1. Currently the NFL and the Raven’s Front Office maintain that they didn’t see the second tape until it was released to the public. This is counter to what many assumed.  If TMZ could gain access,  why couldn’t a powerful organization like the NFL? The situation has gotten worse for the NFL as there seems to be questions on when the NFL had access to the second tape.

On September 9th the NFL released a statement stating the second video was not made available to them because it was part of an ongoing criminal investigation.

On September 10th the Associated Press reported that a DVD copy of the second tape was sent to NFL offices by a law enforcement official in early April. The AP also reported that on April 9th, that law enforcement official received a voice mail acknowledging the DVD was received and commented “You’re right. It’s terrible.”  So it seems one person inside the NFL saw the video back in April.

Before the second tape went public it seemed like the Roger Goodell’s latest mistakes were due to incompetence.  Now it appears the NFLs story doesn’t corroborate with the report from the AP.

On the evening of September 10th, Roger Goodell appointed former FBI director Robert Mueller III to conduct an investigation on the NFL’s handling of evidence on the Rice domestic violence issue. On it’s face this seems like an honest attempt on the NFL’s part to understand the truth.

However, if you look into Robert Mueller’s past employment history you have to wonder why this was the guy chosen to conduct an impartial investigation. Here are the facts on Mueller’s most recent employer and why he’s Roger Goodell’s latest mistake.

So the man investigating the NFL handling of evidence, involving a Baltimore Ravens player, is working for the Law firm where the President of Baltimore Ravens, Dick Cass, worked for over 30 years. Furthermore, Dick Cass didn’t just work there, he was a partner since 1979.

This can’t bode well for fixing the image of the NFL on domestic violence. How will anyone ever trust the outcome of this investigation? The president of the thing being investigated used to be a partner at the firm doing the investigation.

There can be no outcome that looks good for the NFL. This is either the most obvious cover-up since Big Tobacco or the worst public relations stunt ever. Best case scenario is the NFL again failed looking into Mueller’s obvious connection to the Ravens, which will make them appear even more incompetent.

Judging by past performance this is most likely just the latest in a string of bad decisions made by the NFL, and not a grand conspiracy. Either way it’s the latest mistake for the NFL commissioner.