Home » Other Technology » Is Virtual Reality Our Future? 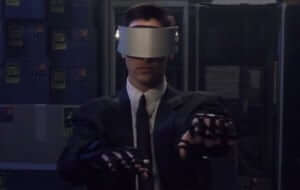 In the early 90’s there wasn’t a person alive that didn’t hear the term “virtual reality” (VR). Everyone remembers those clunky headsets, the polygon graphics, and odd expressions on people’s faces immersed in their virtual worlds. We were promised a virtual future that never materialized. However, it appears those promises weren’t forgotten as big names have renewed interest in what most remember as a 90’s technology fad.

Virtual Reality in the 90’s

In 1985, Jaron Lanier founded the company VPL Research. Within a few years, that company developed googles and gloves for use in a virtual reality gaming system. This virtual reality system generated a computer generated environment, simulating the user’s presence in real or imagined worlds.

The virtual reality system would simulate the sensory experiences of touch, sound, and sight while in the virtual world. By 1991, Sega announced the Sega VR headset for arcade games. That same year, the company Virtuality launched a mass produced virtual reality entertainment system.

The systems were network based, allowing users on the same network to share the same virtual world. Virtuality also launched the first Virtual Reality Arcade in San Francisco.

By the beginning 1992 the mainstream public was excited about virtual reality. Everyone was imagining a world where people could take vacations in a headset. The concept was a part of TV plots. Even “The Lawnmower Man”, a terrible movie based around virtual reality, was able to triple its production budget.

However, our virtual reality future failed to manifest. The technology was too expensive for mass consumption. The immersive virtual reality pods by Virtuality cost up to $73,000 each. Computer Gaming World Magazine predicted that VR would be affordable by 1994, yet the only VR technology released for home use under $200 was Nintendo’s “Virtual Boy”. It was a commercial flop canceled a year after release, as it didn’t come close to delivering what the public expected.

By 1995, virtual reality had become a joke. Aside from a couple of headset user interfaces found in a few arcade games, the technology vanished from the public eye. The technology found minimal use in the medical and scientific fields, but was mainly forgotten by the general public.

The failures of virtual reality in the 1990’s were mainly adoption and expense. The World Wide Web was still in its infancy. Social networks hardly existed outside of bulletin board systems and IRC chat-rooms. People were not accustomed to having a virtual online presence, and they weren’t about to spend $70,000 to have one.

The Resurgence of Virtual Reality

It’s been 2 decades since virtual reality has faded from the mainstream imagination. Over that time we have seen a dramatic rise in interconnectivity. An online presence is assumed in today’s modern world. Xbox Kinect and Nintendo Wii have been largely successful, and people are now accustomed to controlling a virtual avatar using their bodies.

Massively multiplayer online (MMO) video games are played by tens of millions of people every day. Many of us are maintaining a virtual presence In the form of Facebook, Twitter, and MMOs like World of Warcraft.

The technologies used to make 1990s VR headsets are much cheaper now. Today’s computer technology and graphics can deliver a much more immersive feel than what was envisioned 20 years ago.

Given how interconnectivity and online avatars are a daily part of life, has the time finally arrived for virtual reality? Mark Zuckerberg seems to think so. Facebook acquired the virtual reality company Oculus VR earlier this year. Facebook paid 2 billion dollars for the company, even though Oculus had developed only a prototype VR headset to prior to the acquisition.

Zuckerberg acknowledges that VR technological advances are mainly in gaming. However, he sees VR as “the next major computing platform that will come after mobile.” He sees VR to go beyond gaming, saying “immersive virtual and augmented reality will become a part of people’s everyday life.”

The Oculus headset is called “The Occulus Rift”, and while not yet commercially available, a development kit can be purchased for $350. The Rift development kit provides everything one needs to build virtual reality games and experiences in high definition, with positional tracking, and natural field of view. A consumer version could be available as early as next year for as little as $200.

The Future of Virtual Reality

With a price point around the cost of a cheap smart phone, it’s much easier for companies to take a gamble on adopting virtual reality technology. With teleworking becoming the norm in modern business, VR could host meetings taking place in the same virtual space. Since the headset is a computing platform, all of the information on your computer is with you in the virtual meeting.

The virtual meeting space also provides a presentation platform, and could provide information available from the internet to meeting participants on demand, in real time. Spur of the moment virtual meetings could take place as well. A subject matter expert could be brought into a virtual space to consult or troubleshoot an issue, again with the ability to share information pertinent to the users issue.

On the job training would change forever as VR could take employees through simulated work experiences. Doctors could practice surgery in VR spaces. Educational experiences would be easily available to anyone with a pair of VR goggles.

Getting together with friends around the world could take place from the privacy of ones own home. The entertainment possibilities are limitless. One could enjoy a sporting event, watch a play in the theatre, or take part in a murder mystery game with their friends without leaving the house.

Facebook isn’t the only company betting on this awesome, but possibly creepy, future. Sony wants to see how deep the VR rabbit hole goes with Project Morpheus. Google revealed DIY virtual reality with Cardboard (yes this is real). Samsung also has its head in the game with Gear VR.

With these major players investing big bucks in VR technologies it’s only a matter of time before virtual reality is part of our everyday experience. The only thing standing in the way of virtual reality is the possibility that it creeps everyone out.