You are here: Home / Other Technology / Games to Teach Kids Programming Skills 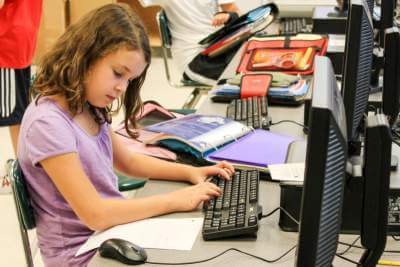 The writing is on the wall.  The future our kids are entering will be full of user interfaces, electronic gadgets, and software. The choices they make now and throughout their education will dictate whether they have a part in owning this future, or merely being a consumer of this future.

The best way to prepare children for this digital reality is to teach kids programming skills and instill them with a developer mindset early. Initially, this appears mundane. However, a programmer mindset is very beneficial to daily life. For instance:

Building these programming skills will not only set a child up for a career in IT, but aid them in personal development as well. However, I wouldn’t recommend every elementary school child hop on the PC and start writing “Hello World” in Java.

Not every child will find this engaging as it takes a certain mindset to enjoy programming.  If they immediately enjoy this, then by all means allow them to learn a coding language. However, if they don’t appear interested, games are excellent tools to lay the foundation to ingest those programming skills.

Here are three outstanding games to teach kids programming skills cultivate their mind and prepare them for the information age:

Minecraft is a sandbox video game that allows the creation of any structure that springs from the imagination using textured cubes in a 3D world. Players start the game in a randomly generated world entirely composed of various terrain “blocks”.

All blocks can be harvested and placed in any location allowing for the creation of structures.  Some blocks also provide resources when harvested which allows crafting numerous objects from a fairly large amount of schematics known as recipes.

While this is extremely entertaining, the intriguing mechanic of this game is redstone. Redstone is harvested and acts as an electrical wire that can be powered. Ultimately, this equates to the wire being on or off. This translates to a 1 or 0 in binary.

The redstone mechanic allows the creation of logic gates such as AND, OR, NOT, etc.  This enables the player to turn the wire on and off based on conditions in the world. Ultimately this mechanic leads to the creation of control systems to operate in-game machines.

Minecraft players have designed sophisticated redstone systems such as elevators, security systems, and even replicas of an early CPU.  The game teaches many skills, from architecture to critical thinking. However, the redstone mechanic can build an understanding of computer logic while your child exercises their imagination building and creating within Minecraft.

Code with Anna and Elsa

“Code with Anna and Elsa” consists of a series of tasks for Anna and Elsa to complete. The user completes the tasks by organizing “programming-like” menu commands in a certain order.  Once the commands are in the correct order, the user clicks run, and Anna or Elsa will complete the task.

While this is a fantastic tutorial to interest young children, it is extremely short. However, there are other coding tutorials on the site.  Code.org is a great tool to introduce to elementary age school children.

Tynker.com allows parents to buy lifetime access to programming courses for your child.  Ada’s Adventure is one such course that visually teaches an introduction to programming.

Like Code.org, Ada’s Adventure uses a drag-and-drop interface where kids order program commands in a logical order to complete a task. However, Tynker.com courses are much more in depth then the gameplay in Ana and Elsa.

Users will learn how to program an onscreen robot to respond to keyboard commands, create a music machine that generates notes, and create stories using conditional logic and more. There are over 100 activities for kids to enjoy. Meanwhile, they are being taught to think like a programmer.

Once your child learns the fundamental concepts of programming using the visual interface, Tynker.com can transition them to JavaScript, showing them how real computer code relates to the visual commands they previously used.

If you’ve tried these games or others please share in the comments.  I’m always interested in learning new ways to engage my girls in programming.