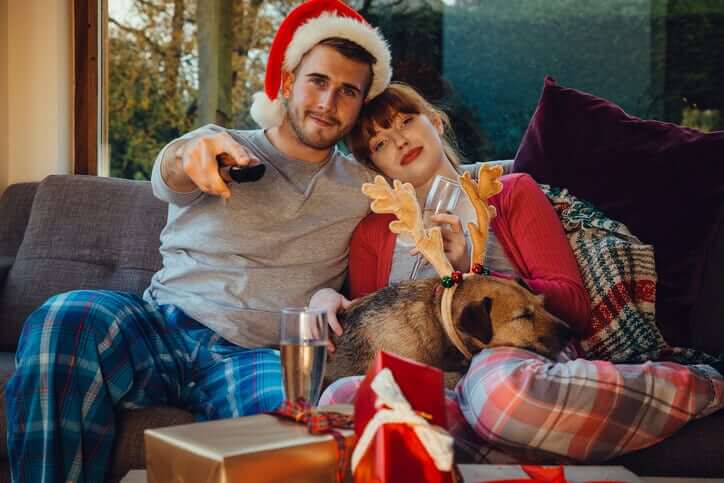 Is it ever too soon to start watching holiday films? Whether you wait until after Thanksgiving to crack your first holiday flick, or binge on Christmas in July, here is a roundup of some of the best holiday films available to stream on Amazon this season, including free Prime options, rentals, and a few purchase-only*.

We have you covered from the classic to the cult classic of Christmas viewing.
If you aren’t an Amazon Prime member yet, they offer a free 30-day trial, and then subscription options include:

* Keep your eyes peeled, streaming services frequently shift to more free options as the holiday grows closer, so some rent- or purchase-only options may become Prime offerings going into December.

A Christmas Carol (1951) – This 1951 version of the classic Christmas story, starring Alistair Sim as Ebenezer Scrooge, is considered by some to be the best version by fans and film critics.

The Man Who Invented Christmas – Follow your viewing of A Christmas Carol with this 2017 biographical drama that follows Charles Dickens at the time that he wrote the classic holiday story; staring Downton Abbey’s Dan Stevens, as well as Christopher Plummer and Jonathan Pryce.

Holiday Inn (1941) – Another traditional holiday classic, this 1942 Irving Berlin musical starring Bing Crosby and Fred Astaire covers all the holidays of the year, musically, bookending the story with Christmas.

Jack Frost (1979) – One of the few Rankin/Bass stop-motion animation holiday films available streaming (although a couple are in a collection of Christmas Classics to rent), this family film tells the story of Jack Frost, and love of a mortal woman.

Also, while not necessarily “classics,” Amazon Prime has made sure to have a few free holiday romances to compete with the Hallmark TV movie popularity, so flip through other holiday offerings if you’re looking for something romantic.

Christmas Movies to Rent On Amazon

A lot more holiday favorites are available for rent on Amazon Prime. Rental prices are usually $2.99 for Standard Definition (SD) and $3.99 for High Definition (HD), although some are only available for one or the other. Rental periods for Amazon Video are 30 days to start the movie, with 2 or 3 days once viewing begins.

Nightmare Before Christmas, $2.99/$3.99 – Bridge the gap between Halloween and Christmas with Tim Burton’s delightfully magical 1993 stop-motion film, which is both spooky and heartwarming all at the same time.

Miracle on 34th Street (1947), $2.99 – One of the top holiday classics of all time, this traditional family movie speaks to everyone about the power of love and belief in the unbelievable.
(There is also a 2006 TV adaption available for free Prime streaming.)

A Muppet Christmas Carol, $2.99/$3.99 – A great way to introduce your kids to the classic Christmas story, featuring musical numbers and all their favorite Muppets including Kermit, Piggy, and Gonzo.

White Christmas, $2.99/$3.99 – Bing Crosby and Danny Kaye are former army buddies turned song and dance men who, along with Rosemary Clooney and Vera Ellen, bring Broadway to the hills of Vermont in order to save their general’s inn in this beloved holiday musical.

Christmas in Connecticut, $2.99 – Barbara Stanwyck stars in the 1945 romantic comedy about a city writer who pretends to have an idyllic Martha Stewart-esque country life in her column, and then must try to create truth from the fiction to host a holiday dinner—and hilarious antics ensue.

Love Actually, $2.99/$3.99 – This modern classic has become a holiday favorite for many since it debuted in 2003, as it weaves together themes of love, loss, and family across nine interconnected stories, featuring an all-star cast of British (and a few American) film talents including Alan Rickman, Emma Thompson, Hugh Grant, Liam Neeson, and Laura Linney.

Die Hard, $2.99/$3.99 – To counter the sweetness of Love Actually, treat yourself to another type of classic set at the holidays with Bruce Willis and a very different Alan Rickman. As terrorists derail an office Christmas party, an off-duty cop fights to stop the villains and save the day in this gritty action film. Yippee-ki-yay!

A Christmas Story, $3.99 – All Ralphie wants for Christmas is a Red Ryder air rifle, in this iconic and beloved quirky family comedy, based on the humorous writings of Jean Shepherd.

Gremlins, $3.99 – One of several great alternative holiday films, Gremlins is a comedy/horror in which an adorable creature’s evil offspring wreak havoc on Christmas Eve.

While You Were Sleeping, $2.99/$3.99 – When lonely toll collector Sandra Bullock gets mistaken for her secret crush’s fiancé after saving him from the path of a train, she allows the coma-bound man’s family to take her in for the holiday season, leading to even more complications when she meets his charming brother (Bill Pullman)

Elf, $3.99 – This 2003 movie has become a holiday classic across the board, with Will Ferrell’s earnest portrayal of a human man raised as one of Santa’s elves now trying to make his way in New York City.

Arthur Christmas, $2.99/$3.99 – This heartwarming animated film is great for kids and families. Santa’s son teams up with his grandfather to find a little girl’s lost Christmas present.

Dr. Seuss’ How the Grinch Stole Christmas (2000), $2.99/$3.99 – Unfortunately, Amazon doesn’t have the 1966 animated short in streaming version, but the feature-length movie with Jim Carrey is a great romp.

The Santa Clause, $2.99/$3.99 -Tim Allen stars as a divorced businessman who takes over the role of Santa (after accidentally killing the jolly toy giver), in this 1994 modern family classic.

Amazon has several premium channel upgrade options available for a monthly charge. With them, certain movies and TV shows that are usually rental only are free to stream. STARZ (available for $8.99/month addition to your Prime membership) has several modern holiday films, including:

Scrooged – This modernized version of A Christmas Carol stars Bill Murray as a curmudgeonly TV executive who learns the true meaning of Christmas.

Home for the Holidays – Holly Hunter stars in this dysfunctional family holiday comedy-drama about a single mom, fired from her job, who goes back to her childhood home for Thanksgiving.

Streaming (but for purchase only)

Finally, if you’re looking for favorites like A Charlie Brown Christmas, It’s a Wonderful Life, or the modern twisted holiday film Bad Santa, they can be streamed at the heftier cost of purchasing the downloadable film (but that means it’s yours every year!).

Movies rented or purchased can be streamed on the Amazon website, or watched through any device that hosts the Amazon Video app, including Roku, Apple TV, Tivo, as well as smart TVs, gaming consoles, and mobile devices. Shows and movies can also be downloaded for offline viewing in-app.