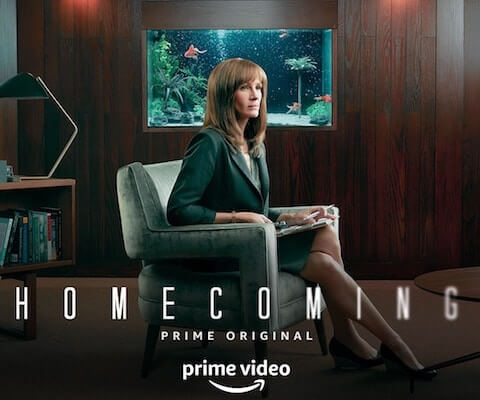 While not the first podcast to switch media, Gimlet Media’s Homecoming is definitely in the first wave and is near the head of the pack of fiction podcasts to make the leap so far. (Cult favorite Welcome to Night Vale is currently in development with FX, and Amazon has previously adapted history/folklore podcast Lore.)

Eli Horowitz and Micah Bloomberg created Homecoming, an experimental-fiction podcast reminiscent in sound to traditional radio dramas, in 2017, and it quickly became a mainstream hit on its release. Homecoming, whose all-star cast included the vocal talents of Catherine Keener, Oscar Isaac, and David Schwimmer, explores the story of a former caseworker who worked at Homecoming, a secret government facility aimed at helping veterans re-enter civilian life.

The podcast is made up of audio clips—scraps of interview tapes, phone calls, and chunks of interrupted conversation in which the audience is an eavesdropper—that alternate the story between the past and present, slowly unwinding into a complex and mysterious conspiracy.

Now, the psychological thriller is in the hands of Sam Esmail to bring it to life as a web television series for Amazon Studios. Esmail, whose USA Network thriller series Mr. Robot was a critical smash, taking home Golden Globe and Peabody Awards, is also the director and executive producer on this new series.

Homecoming marks the first time Esmail has directed someone else’s material, and he also takes on the challenge of translating the specifically audio-driven story to a visual medium. His focus, as discussed in an interview with Fast Company, is to “use the camera to heighten the suspense and tension already present in the narrative.” Creators Horowitz and Bloomberg are credited with co-creating and producing the series episodes based on their original material.

The Amazon adaptation of Homecoming is set to debut on November 2 with a 10-episode first season, and a second season is already greenlit. The series stars Julia Roberts, in her first TV series-starring role, as Heidi Bergman, the former caseworker with Homecoming, now in a new life taking care of her mom and working as a waitress in a local diner. When the Department of Defense comes asking questions, however, she begins to realize that there is a lot more to the mysterious Homecoming story than she thinks. Intrigued and interested in more? Check out the latest trailer released by Amazon this week.

UPDATE: On Friday, October 26, Gimlet updated the Homecoming podcast feed with a behind-the-scenes look at the Amazon TV adaption. This was the first in a series of crossover episodes of Gimlet’s debut podcast, StartUp, in which host and founder Alex Blumberg describe the process of adapting the audio-based story into a television thriller.

Where to Watch Homecoming

Homecoming makes its debut on November 2, and is an Amazon Studios production, meaning it’s currently only available through Amazon Prime. However, that makes it free to all Amazon Prime subscribers to watch beginning November 2. If you aren’t an Amazon Prime member yet, they offer a free 30-day trial, and then subscription options include:

(There are also discounted plans for students and members with valid EBT or Medicaid cards.)

Episodes can be streamed on the Amazon website, or watched through any device that hosts the Amazon Video app, including Roku, Apple TV, Tivo, as well as smart TVs, gaming consoles, and mobile devices. Shows and movies can also be downloaded for offline viewing in-app.