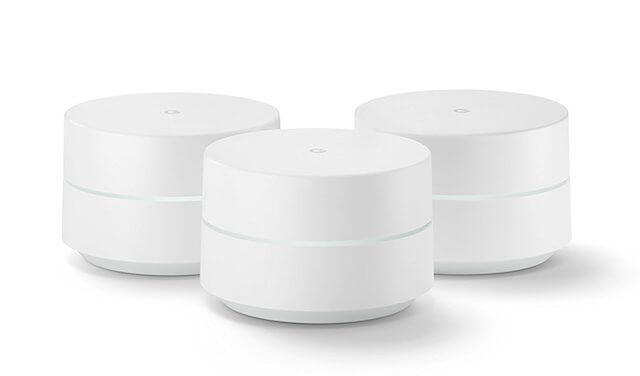 The biggest headache any cord cutter can face is buffering or poor quality video. The majority of these issues are typically called by poor quality Wifi in the house. Most folks get their router, plug it in, and expect it to work.  However, there are a number of things to consider if you don’t want sub-standard Wifi.

Google Wifi System has simplified these considerations. You can now purchase a wifi mesh network which literally took me 10 minutes to set up.

Previously, I used wired connections on streaming devices in my house to ensure a good connection. However, I recently got the bug to eliminate or hide as many wires as possible in my home. Therefore, those ethernet cables had to go. After hours of research, I ultimately decided to try Google Wifi System to put a wifi mesh network in my home. I was not disappointed.

What is Google Mesh Wifi?

Google Mesh creates a mesh network of routers that wirelessly communicate to create a quilt of Wifi connectivity. This eliminates dead zones and ensures you are always on the optimal network point with the best connectivity. It even puts each device on its optimal channel and Wifi band. This ensures your devices have fast, consistent connections to the network.

Typically your router is in one location in the house. If you are too far away from it your connection is terrible. You can install wireless extenders and repeaters, but that can be a big hassle. If your router and extender aren’t the same brands, it can be a nightmare.

A single Google Mesh Wifi Router will cover between 500 and 1500 ft. However, you can buy them in 3 packs for coverage up to 4500 ft. If you need to cover more space, it’s simple to just plug in another Google Mesh Router and add it to the mesh.

You can buy single Google Wifi Point for just under $120 or a 3 pack for around $260.  This puts them on par with what you would spend for a decent router and wifi extenders. Each Google Wifi Point comes with a 15W power adapter and a quickstart guide. Both the single and 3 pack come with just one 6.5 ft Ethernet cable that connects to your ISP router\moden or Optical Network Terminal in the case of something like Verizon Fios.

Each Google Wifi Point has the following specs:

Why I Recommend The Google Wifi System

For anyone that streams a lot of video content online and needs a consistent dependable Wifi connection, Google Wifi System is the best wifi mesh network I’ve looked at. It has all the latest standards and specs you would want out of a modern home router and it automatically manages all the networking tasks that are either a headache or ignored by most people. Here is a list of things the Google Wifi System features:

The Google Wifi System eliminated all the Wifi dead zones in my house. Furthermore, the network is consistent everywhere in my house. A wifi mesh network is preferable to using range extenders which degrade speed when handing off to the router. Google’s wifi mesh is one consistent stable network.

The family controls are excellent. You can pause the wifi of individual devices or create a label for each child that groups devices you want to pause.

If you are streaming or downloading a game to an Xbox or PlayStation, you can prioritize that device on the network to give it the most bandwidth.

All of these features are controlled by the app on your smartphone.

Setting up the Google Wifi System is one of the easiest tech-based things you will ever do. I set up 3 Google Wifi points and it only took 10 minutes. Here is what you need to get started:

After your Wifi points are set up, the app will download and install the Google Wifi software, which includes the latest features and security measures. This can take up to 10 minutes. Your Wifi points will restart and your Wi-Fi network will be down until the Wifi points fully turn on when the light is solid teal.

Below is a video that shows the steps I outlined above.

Google Wifi is one of the best investments you can make in your home. With live video streaming, smart home technology, and video communication,  quality home wifi is must-have in today’s world. The Google Wifi System is a worry-free mesh wifi network that provides consistent wifi throughout your house while automatically managing the security and performance of your network. This is an easy 5 out of 5-star recommendation.