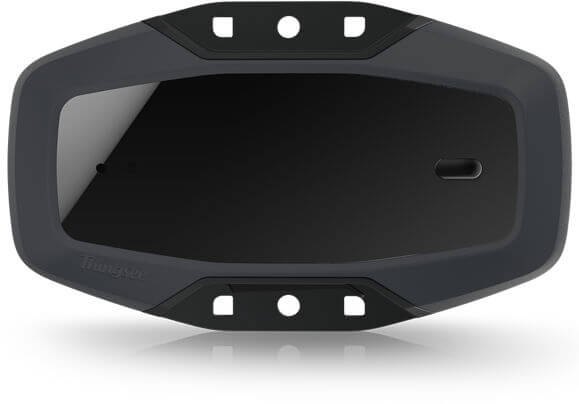 California based tech start-up Haltian is attempting to make Internet of Things (IoT) device innovation easier for both independent developers and do-it yourself types. Currently, the largest hurdle to IoT device invention is hardware design. Coding, while a specialized skill, doesn’t require an expensive toolkit. Furthermore, code is extremely simple to mass produce. Hardware, on the other hand, requires a different kind of expertise and can be very costly to design and produce. Haltian is trying to solve that problem with the Thingsee One.

Thingsee One is a sensor loaded device that comes with cellular, Wi-Fi, and Bluetooth capability. Out of the box, the device provides the ability to set notifications based on data thresholds  captured by the sensors. This allows even non-programmers to use the device “as-is” developing their own Internet of Things application for use in their daily lives.

As the test driver takes the car for a spin, the son and his friends are celebrating the data coming off the Thingsee One from the car racing around the track. Meanwhile the father is back at home freaking out over the notifications being sent to his smart phone indicating his son’s car is exceeding 180 km/h!  That’s 112 mph for my fellow Americans.

The device can communicate data gather from the sensors using Bluetooth, Wi-Fi, or cellular technology. Current documentation shows the Thingsee One has a built in monochrome OLED display, an unlocked micro-SIM card slot, a micro-SD card slow, and uses micro-USB for charging and data transfer. It boasts a 1 year battery life and contains the following sensors:

Not only is the Thingsee One usable as a consumer product, but it’s mainly geared toward other start-up IoT device innovators. The Thingsee One comes with the Thingsee Backend SDK based on NodeJS and the Meshblu platform. It allows the development of web applications and services using NodeJS, Ruby on Rails, and PHP among other tools. Currently the device sends data over HTTP, but other protocols are said to be in the works.

Haltian also offers would be developers full control of the hardware via the Thingsee Device SDK. This will allow developers to extend the functionality of the device using C, C++, or Assembly Language.

The project is currently being funded through Kickstarter, where they have a current timeline published indicating a plan to ship in April of 2015. I strongly recommend checking out their page for more information. It’s worth a look just to see potential use cases Haltian has in mind.

IoT Devices: Next IT Boom?

It’s been about 20 years since the last IT boom.  In the early 90’s fortunes could be made overnight with a decent eCommerce idea and some web programming skills.  The IT landscape is primed for another revolution. With all the emphasis being put on information and data science, the Internet of Things seems like the next logical step in using that information.

IoT devices can enable imaginative ideas to come to fruition.  For example, imagine a 2D barcode or  tiny RFID being attached to refrigeratable goods in the grocery store. A “smart refrigerator” could use sensors to know what is in the refrigerator at any moment. Next time you make a quick stop at the store, your smart phone could pull up your fridge app and let you know that you know other items you are currently out of.

The RFID or 2D barcode could contain information about the expiration of goods and other metadata.  The refrigerator would also be able to run analytics and possibly even inform you to buy 1/2 gallons as opposed to whole gallons of milk because you rarely finish the gallon.

The IT research firm Gartner sees IoT devices having exponential growth over the next decade.  They are predicting a 47.5% growth in IoT semiconductor revenue in 2015 alone. One of the reasons for this growth is consumer demand. Gartner says:

Consumers looking to enhance their lifestyles will also play a central role in growing IoT demand, which in turn will create more demand for semiconductors.

The Internet of Things is going to be the next IT frontier where virtually anyone with an innovative idea will be able to stake their claim and strike digital gold. The Thingsee One could eliminate the most difficult phase of building IoT devices. Getting the hardware right for a prototype can be an extremely arduous task for even accomplished software developers. With Haltian putting potential innovators on the fast-track, the Internet of Things is primed to break out within the next 5 years.