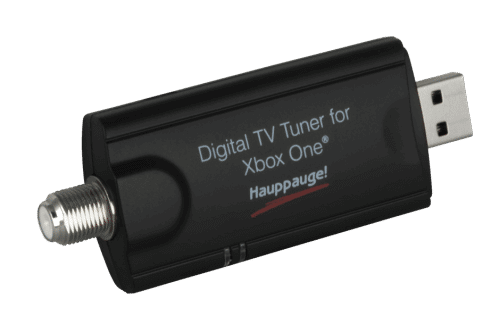 Microsoft has been marketing it’s Xbox One as the only device you need to attach to your living room television. It’s a superb game system, it runs apps like Sling TV, Hulu, and Netflix, and now you can connect a TV antenna for networks like Fox, ABC, NBC, CBS and more.

That’s right!  This week Microsoft announced U.S. and Canadian Xbox One owners will be able to connect their TV antenna to their Xbox One using the  Hauppauge Digital TV Tuner for Xbox One. This will allow Xbox One users to watch local broadcast TV in the same guide they use to play video games and stream TV and Movies.


The Hauppauge Digital TV Tuner for Xbox One connects to your Xbox One’s USB port. Once installed, simply connect your antenna to the coaxial port on the device.

Microsoft stores are currently selling the Hauppauge Digital TV Tuner bundled with a Mohu Leaf for $99. However I would first check Mohu’s Over-the Air TV tool to see which antenna is right for you based on the available broadcast networks in your area.

The Hauppauge Digital TV Tuner combines with Xbox One to provide a ton of features for enjoying Over the Air TV.  Here are a few stand-out functions:

Pause Live TV on Xbox One: – The Hauppauge Digital TV Tuner provides a 30 minute buffer allowing you to pause live television for 30 minutes.

Xbox OneGuide: Local Channels are integrated into the Xbox OneGuide allowing you to do such things as watch a TV show while viewing a Twitter feed about the show.

Change Channels With Voice Kinect: Imagine saying “Xbox: Watch CBS” and the channel changes to CBS. Well, that’s how it works so If you have an Xbox One and this tuner you don’t have to imagine it.  You can do it.

Stream to Any Device with SmartGlass: Anything that shows in OneGuide on the Xbox One can be streamed to another device in your home with the SmartGlass app. SmartGlass is available on Windows, Windows Phone, iOS and Android.

If you are curious about OTA DVR functionality. Microsoft is rumored to have Xbox One with  DVR functionality later this year. Keep in mind that Xbox One can also integrate Cable TV into it’s OneGuide. Therefore, an Xbox One will be a highly coveted device not only among cord-cutters, but cable subscribers as well.  Imagine not having to pay exorbitant DVR fees to your cable provider.

This is an exciting development for cord-cutters.  Personally I’m still running an Xbox 360. however this news had me so excited I’m thinking about running out and getting an Xbox One right now.  Time to check the compatibility on the children’s Disney Infinity stash.

If you are interested in watching TV without cable, Xbox One is a very viable option.