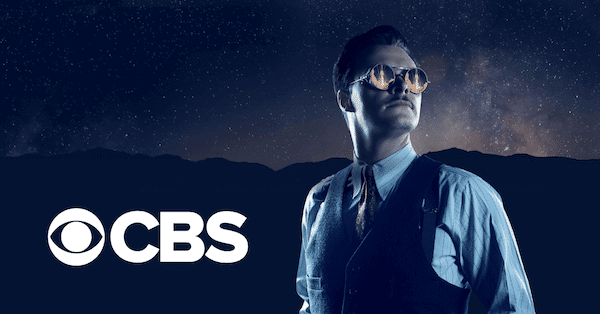 “Step outside your yard you never know what you’ll find.”  – Strange Angel

Much like the development of content for CBS All Access, the streaming network’s Strange Angel is a slow burn. With its fascinating subject, tightly designed visuals, and an eerie cinematic quality, however, the series keeps viewers intrigued as it delves into a weird hybrid of science and the occult in 1930s Los Angeles—based on the life of very real scientist Jack Parsons.

When CBS launched its All Access direct-to-consumer service in October 2014, the primary content was on-demand access to current network programming.  Over the next few years, the service slowly rolled out apps for streaming on devices such as Roku and Chromecast, the addition of expanded sports coverage, and an archive of older CBS programs. In 2017, All Access added new online-only programming with the announcement of Star Trek Discovery, the latest series in the science fiction franchise, and The Good Fight, a spinoff of the network’s hit legal drama The Good Wife, which moved from broadcast to All Access.

Strange Angel, which debuted June 14, 2018, marked one of the first fully original programs to air on the direct-to-consumer network, one that wasn’t based on an existing series or franchise. Created by Mark Heyman (Black Swan) and produced by Ridley Scott, Strange Angel is based on the biography Strange Angel: The Otherworldly Life of Rocket Scientist John Whiteside Parsons by George Pendle. The series follows the story of the real-life Jack Parsons, co-founder of the Jet Propulsion Laboratory and the Aerojet Engineering Corporation, who went from a struggling blue-collar worker to a visionary rocket engineer—and disciple of occultist Aleister Crowley.

The series features Jack Reynor as Parsons, Peter Mark Kendall as Parsons’ friend and partner Richard Onsted, Bella Heathcote as his wife Susan Parsons, and  Rupert Friend as the Parsons’ mysterious and reckless neighbor who leads them into the path of the Los Angeles occult scene.

Half of the appeal of Strange Angel is its lush production design and tantalizing direction. From the rich saturate colors of Jack’s comic book fantasy daydreams to the earthy sepia of Depression-era Southern California, the creators invest a rich layer of color and texture in every scene of this historical drama. Eerie underscoring, shadow play, and lurking camera angles give every scene a sense of subtle unease and anticipation and build up suspense for the strange events that begin to unfold.

For more, check out the full trailer for season one below.

On October 28 CBS confirmed Strange Angel was being renewed for a second season.

For a deeper discussion on All Access features and pricing, see our previous review of CBS All Access.

As more and more original programming is announced, All Access is striving to earn its keep. For sports fans, or hardcore Trekkies, a monthly service fee might be worth it. It took Strange Angel for this TV fan to bite (despite a deep Trek-love), and a hope that more interesting original content will be added. Much like Hulu’s The Handmaid’s Tale, All Access rolled the show’s 10-episodes out weekly, and unless you upgrade, it still comes with commercials. So while the show’s quality might be a few pegs above the average broadcast program (and the content is definitely of the cable variety), all the perks of a premium service aren’t there yet.

How to Watch Strange Angel

CBS All Access offers a seven-day free trial, and then plans start at $5.99 for limited commercial viewing. A commercial-free plan is $9.99, although streaming live broadcast TV is not commercial free. Both plans can also be purchased at a discount for an annual commitment, of $59.99 or $99.99.

In addition to going directly through CBS.com, All Access can be subscribed to through Amazon Prime as a channel add-on for $5.99 monthly (if you prefer all your streaming through one service).